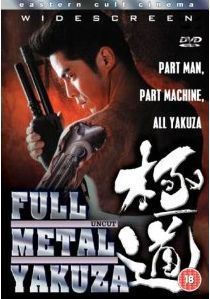 Ken Hagne desperately wants to join the hallowed, and extremely violent, Yakuza gang where each leading member is adorned with intricate tattoos. And as with every new member they have to start at the bottom and work their way up the ladder. In Ken's case this truly does involves starting at the bottom as his daily tasks involve sweeping and cleaning the floors. However, Ken doesn't complain about these tedious tasks and his dedication to his work is soon noticed by the big boss - Tosa.

Ken is finally given his big chance to prove himself and he's sent out the money collection run where he has to persuade some of the people mad enough to borrow money from the gang to pay up their dues. Unfortunately, when it calls for violence Ken is not up the job and he just can't bring himself to beat up an old man - in fact an old women chases him off the premises. And when he's sent out on a hit to take out a rival gang member his nerves get the better of him and he chickens out at the last minute. The ultimate humiliation arrives when a gang of youths set upon him, and even though he tells them he's a member of the feared Yakuza gang, they still beat him into a pulp.

For all Ken's shortcomings Tosa still likes and trusts Ken so when Tosa is sent to prison for murdering the boss of a rival gang Ken promises to keep hold of Tosa's wallet until his release. But whilst Tosa is in prison things change within the Yakuza gang and Tosa is not as respected as he once was. Upon his release Tosa expects to pick up where he left off but the gang has different ideas and when Tosa and Ken go for a meeting with a rival gang both men are assassinated and their bodies sold on the black market.

Their bodies are then bought by professor Genpaku Hiraga, a self proclaimed genius, who is attempting to build the ultimate cyborg. Using the best and undamaged bits from Tosa and Ken he finally creates the ultimate metal warrior (with additional trouser bulging appendages) that survives on eating bits of scrap metal. Although Ken is not particularly pleased with his new appearance and lifestyle, upon learning about the fate of his boss the all new super-robo Ken sets out for revenge on the gang that betrayed them both. This is going to be messy...

With the film being made on a shoe string budget the picture quality cannot be compared to anything like a big Hollywood blockbuster, even the picture quality of Channel Five gives Full Metal Yakuza a run for its money. The transfer is reasonable enough with fair amount of detail although its low budget origins are clear to see with a transfer that suffers from a real lack of colour depth. There's also a slight problem with grain, although this only tends to be a problem during darker scenes. Fortunately, there are no apparent problems artifacting and the print is free from any signs of dust scratches or other picture imperfections (but for a direct to video production I'd be surprised with any other outcome).

As with the picture, the 192Kbps Dolby Digital 2.0 soundtrack has very little to get excited about and unless you understand Japanese you'll have to put up with subtitles. The dialogue appears to be clear enough but not speaking a word of Japanese I couldn't tell you whether it was any good. However, both the musical score and sound effects (which are typically over the top for a Japanese film) blend in well enough and the audio is free from background noise.

The menu is reasonably animated and scored with some techno-style music which adds an element of excitement to the overall presentation of the disc. The menus are also easy to navigate through and are simply and clearly laid out. The film is also accompanied by a reasonable set of extras which fans of cult director Takashi Miike are sure to relish.

The main extras on the disc are the a half-hour interview with director Takashi Miike and the fifteen minute one with editor Yasushi Shimarmura. Unsurprisingly, neither is in English so you'll need to to put up with yet more subtitling and where as the main film has a selectable English subtitle track (which is on by default) these subtitles are burnt on the screen. Mind you, this hardly matters if you don't speak a word of Japanese.

Details wise, both interviews offer some interesting information on the film, it's minute budget and the fact that it was actually made as a direct to video release in only two weeks. Picture quality on both interviews is, at best, rather poor. It looks like it was made with a cheapo camcorder and is thus accompanied by some typically "hissy" audio and one of those irritating people who keeps coughing in the background. But since you're having to concentrate on reading the subtitles you'll probably not be distracted by these annoying little problems.

There's also a reasonable audio commentary from author Tom Mes (fortunately, this one is in English) and it offers a fair amount of information on Takashi Miike and his film making style. After watching the interviews with Takashi Miike and Yasushi Shimarmura there is an element of repeated information, but Tom still manages to talk all the way through with very few quiet moments. Other extras include biographies and filmographies on the cast, a number of previews of forthcoming CG animated titles and an artwork slideshow of other Artsmagic titles.

Intentionally or not, Full Metal Yakuza is actually quite a funny film in a typically bizarre and silly Japanese fashion. The mad Frankenstein scientist who creates the super Yakuza is especially funny and with a Japanese film always in need of a stooge, dressed in a full leather bodysuit (plus flowing yellow cape) he fits the bill perfectly. The acting is also fantastically wooden and over the top whilst the "special" move employed by Ken to dodge bullets is particularly amusing.

Other than one scene in the film there was no real need for Full Metal Yakuza to receive an 18 certificate. The amount of blood and gore is not that particularly realistic or graphic, but there's plenty of it with bits of limbs and blood flying all over the place with director Takashi Miike getting through more "raspberry syrup" than the local pancake house. There are also a few scenes where various body areas have been blocked out whilst there is one excessively violent gang-rape scene. I suspect that this single scene resulted in the 18 certificate and I'm not sure whether the film really needed it. In a film full of black humour and spoofs, most obvious of which being Robocop, perhaps it was a nod to A Clockwork Orange.

With Japanese cult classics such Ichi the Killer under his belt, fans of Takashi Miike are sure to enjoy this rarely seen film; even more so now it comes equipped with English subtitles. However, main stream film fans will probably want to stay away from this one. Still, there's no better way to start enjoying that weird and wonderful thing known as Japanese entertainment. After all, have you ever seen the game show Endurance?