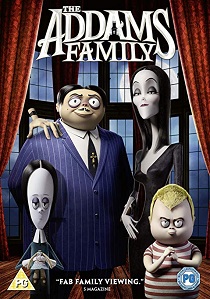 Everyone's favourite creepy and kooky family is back in the animated feature film, The Addams Family, released 2rd March 2020 on DVD and Blu-ray from Universal Pictures (UK).

The very first full-length animated film about the eccentric and unconventional family, The Addams Family on Blu-ray, DVD and Digital showcase the wonderfully weird world of the Addams family with a variety of exclusive bonus features not seen in theaters including deleted and extended scenes, an interactive charades game with Thing, behind-the-scenes footage, music lyric videos and more!

Filled with wildly funny moments and a fresh take on the beloved characters created by Charles Addams, The Addams Family celebrates the uniqueness of every family and delivers spooky fun all year long.

HotBDUHD
A winner of awards across the world including Best Foreign Language Film Oscar, 5 BAFTA Awards including Best Actor, Original Screenplay and Score, the Grand Prize of the Jury at the Cannes Film Festival and many more, Cinema Paradiso is released on Blu-ray and 4K UHD 28th September 2020 from Arrow Video. END_OF_DOCUMENT_TOKEN_TO_BE_REPLACED
Hot PicksView