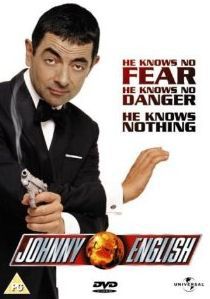 When all of the British secret service agents are killed in mystery bombing incident during a funeral, MI7 is left with a single agent to defend the realm. Trouble is, that agent is Johnny English, an enthusiastic but incompetent desk jockey. However, it's all the secret service has, so along with his office assistant Bough they are drafted in guard the recently renovated crown jewels for their first public appearance. Naturally, things don't go to plan and the jewels are stolen from under Johnny English's nose.

Johnny suspects that Pascal Sauvage, a French business mogul who was responsible for the jewels renovation, is responsible. He has no proof to back up his accusation other than the fact Pascal Sauvage is a French man. But he may just be onto something, even if it is totally by accident. For Sauvage is a distant relative of the Royal Family and if the Queen were to abdicate, and the other family members rescinded their claim to the throne, Sauvage would be crowned king of England.

Whilst the present Queen has many powers that she never uses, including the claiming of any piece of land she pleases, Sauvage is planning to use all of the powers that come with the job of head of state and claim every inch of land for himself. With all of MI7's top agents out of the way and Johnny English blundering his way around the case of the missing crown jewels, Sauvage's plan is going to run totally unhindered. Or is it ...?

The picture is surprisingly sharp, bright and colourful with a high level of detail and an above average bit-rate throughout. However, it is far from perfect as during the many darker scenes there is a definite hint of grain, although it's hard to decide whether this is simply down to the encoding process or whether the DVD is highlighting the flaws in the original print. As to be expected from such a recent film, the print is free from those annoying dust. It's just a pity that a picture which showed so much promise fails the night time test

Most recent releases from Universal have included both Dolby Digital and DTS soundtracks and Johnny English is no exception to the rule. Unfortunately, valuable disc space is wasted by a rather plain and disappointing set of soundtracks. Although the DTS separation is its usual superior self, there is still very little to get excited about and you could almost dispense with the surround system for the duration of the film.

The dialogue is crisp and clear in the centre channel with no cross bleeding whilst there is hardly any use of the surround, let alone the LFE, channel. Mind you, for a film of this genre, and no doubt budget restraints, you shouldn't really be expecting too much and whenever there surround channels do struggle into life it is only for the musical score. As a result, I just wonder whether the space used by the DTS soundtrack could not have been utilized better by the extras.

The menu is pleasantly animated and scored with a segment of the film playing in a small window in the centre of the screen. With the film being a Bond spoof the menu presentation and navigation system also has a definite James Bond look and feel to it. Whilst it's certainly not as fancy as its more serious counterparts, it's more than adequate.

Unfortunately, the overall quality of extras is a little bit on the poor side, although I suspect that accommodating the additional DTS soundtrack left little room for the extras. On the plus side the Making of Documentary is quite interesting with a surprisingly good interview with Rowan Atkinson. Fans of Atkinson will be more than delighted by this as he's a very private person who seldom gives interviews and his input is not only interesting but extremely valuable.

The other extras include an Observation Test where you have to watch five short clips from the film and then answer a question. Pay attention and once you've got them all correct, and it doesn't tell you which ones are wrong, can you access the Deleted Scenes. Also included is a rather bland set of Character Profiles and a feature on the Self Defence Techniques used by Johnny in the film. Although the press release blurb mentions this as an extra, I failed to find any signs of it on the preview disc.

Some years back Rowan Atkinson and Ben Miller were signed up by British credit card company Barclaycard to film a number of adverts promoting the wonders of their credit card. And guess what, their characters are identical to those seen in Johnny English. But is this a problem? Well, actually no, as at the time these adverts were enormously popular and were better than half of the programmes they were sandwiched between. It's just a pity that Barclaycard and Universal couldn't come to some sort of arrangement and add them as extras.

Although these adverts may now be long forgotten, and certainly unknown by younger viewers, it's quite surprising that it took so long for someone to catch onto the the idea of making a film containing the duo. It just a pity that some of the classic lines uttered by Atkinson are not repeated here - I especially use to enjoy the advert where the pair were in a rubber dingy and Rowan made sarcastic comments about being relieved of his expensive new binoculars by a shoal of rampaging halibut.

Fans of Rowan Atkinson and his famous Mr. Bean creation are sure to lap this film up and its safe to assume that the part, and more than likely, the film was created as a vehicle for his comic talents. However, other than the car chase scene and its wonderful speed camera retribution, there is precious little to laugh about. But the most annoying thing is that Johnny English had so much promise and the teaser trailer had classic Rowan Atkinson written all over it. But upon seeing the film I found the jokes predictable and, apart from the aforementioned speed camera moment, the film not really that funny.

On the plus side, there's nothing more the British like better than making fun of all those nasty foreigners, especially the French. Not only is the villain of the day a nasty Frenchman he's also rather camp. Mind you, the bumbling British hardly come off as heroes and in these modern times of political correctness it all balances out.

There have certainly been better spoofs, such as the far superior Austin Powers films, but at least it's a British production and Atkinson does at least attempt to pull out the stops in order to make the best of a poor script. Proceed with caution.