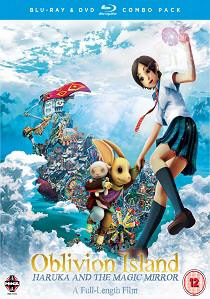 Made by Production I.G, Oblivion Island: Haruka And The Magic Mirror, released on DVD and Blu-ray on 25th March 2013 from Manga Entertainment, is an action-packed fantasy adventure that sees high school girl Haruka magically transported to the titular island, whose colourful inhabitants collect humanity's forgotten belongings. Together with her fox-like companion Teo, Haruka sets off to recover her hand-mirror, a treasured memento of her late mother... but Oblivion Island's evil overlord, The Baron, wants the mirror for his own sinister purposes.

Oblivion island is helmed by film director, screenplay writer and videogame designer Shinsuke Sato, who directed the two live-action Gantz movies. Lead character Haruka is played by Haruka Ayase, star of films such as Cyborg She, Ichi and Hotaru No Hikari, while Teo is voiced by Miyuki Sawashiro, whose many anime roles include Shinku in Rozen Maiden, Saeko in Highschool Of The Dead and Perrine in Strike Witches.

16-year-old Haruka's mother died when she was young, leaving her a hand mirror as a treasured memento. But as the years pass Haruka forgets about the mirror, which is eventually lost when she moves house. One day while visiting a shrine, Haruka spots a fox-like creature collecting odds and ends. Following it, she finds herself magically transported to the mysterious Oblivion Island, a bustling town where everything is built from people's lost and forgotten belongings.

Here is a chance for Haruka to recover her mother's mirror - but as humans are strictly forbidden from setting foot on the island both our heroine and Teo, the fox spirit she followed, will have to tread carefully. And when they discover that The Baron, Oblivion Island's flamboyantly villainous ruler, also want to get his clutches on the mirror, the adventure is thrown into top gear. Add a trio of inept gangsters, a scene-stealing soft toy sheep and one very stylish airship, and you've got a fast-paced fantasy film that will appeal to the whole family!

HotDVDBDDIGITAL
With stunning revelations, glamorous journeys, and the arrival of the Jazz Age, Downton Abbey: A New Era, released on DVD and Blu-ray 15th August 2022 from Warner Home Video, will be the Crawleys' biggest adventure yet as they grapple with their future and new intrigue about ... END_OF_DOCUMENT_TOKEN_TO_BE_REPLACED
Top PicksView