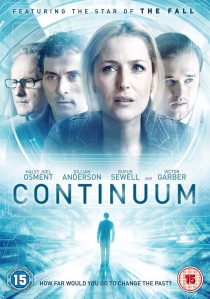 Married couple Marika (Gillian Anderson, TV's The Fall) and Gabriel (Rufus Sewell, The Holiday, A Knight's Tale) spend their lives researching the most controversial and dark corners of physics. Until one day when everything changed...

Catching a flight to deliver a lecture set to change the face of modern science, Gabriel mysteriously disappears, leaving Marika and their son Erol, (Academy Award-nominee Haley Joel Osment, The Sixth Sense) confused and alone with no clues or explanation.

Years pass by, until a bizarre discovery throws Marika and Erol's lives into a new dimension as a glimmer of hope that Gabriel is still alive reveals itself. But in order to try and bring him home, they must risk all they think they know about the universe to change the parameters of reality forever.

UHD
Based on the bestselling comic book, Vin Diesel stars as Ray Garrison, a soldier recently killed in action and brought back to life as the superhero Bloodshot, available 8th June 2020 from Sony ... END_OF_DOCUMENT_TOKEN_TO_BE_REPLACED
Hot PicksView