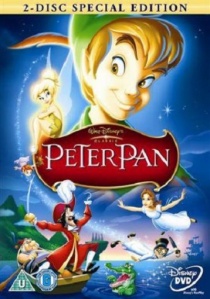 Walt Disney and J.M. Barrie's timeless tale of the boy who never grew up soars onto two-disc Disney DVD full of magic, enchantment and a sprinkling of fairy dust. Magically restored and packed with a treasure trove of exclusive bonus features, kids everywhere will delight in the chance to join Peter Pan and his friends in the wonderful world of Neverland this spring. This very special Disney DVD, released from 12th March 2007, is available for a limited period only before it returns to the Disney vaults.

Follow Peter, Wendy, John and Michael on the trip of a lifetime as they fly over the moonlit rooftops of London, head for the second star to the right and carry straight on 'til morning. Enjoy the thrills and excitement as they join forces with The Lost Boys and feisty fairy Tinkerbell to take on the wicked Captain Hook.

All new bonus features provide surprising insights into the much-loved classic with never-before-seen footage and featurettes including Backstage Disney - an exciting exploration of how the film was created. Camp Neverland A fun interactive game invites kids to train to be a Lost Boy and challenges them to Smee's Sudoku Challenge. You can also join Tink' on a very special flight! With audio commentaries, brand new music videos and much much more to enjoy.

The magic begins when the boy who never grows up flies through the Darling's nursery window in search of his lost shadow. Accompanied by his magical pixie companion, Tinker Bell, Peter teaches the Darling children, Wendy, John and Michael, to fly and soon they're off for the second star to the right and straight ahead to Neverland for a life free of grown up rules. There, the notorious Captain Hook and his swashbuckling band of bloodthirsty pirates wait, preparing to sabotage Peter Pan and the mischievous Lost Boys. But waiting too is a certain ticking crocodile, which arrives just in time to surprise the villainous pirate!

DVD
An expert cutter must outwit a dangerous group of mobsters in order to survive a fateful night in The Outfit, released 1st August 2022 on DVD, Blu-ray and 4K UHD from Dazzler Media. END_OF_DOCUMENT_TOKEN_TO_BE_REPLACED
Top PicksView