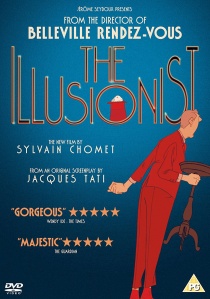 The Illusionist, a heart-warming and charming animation is released on DVD on 14th February 2011 by Pathé Productions Ltd. Critically acclaimed and directed by the Oscar® nominated and BAFTA Award® winning Sylvain Chomet (Belleville Rendez-Vous), and written by Oscar® winner Jacques Tati (Mon Oncle), The Illusionist will captivate viewers at home from Valentine's Day.

Nominated for a Golden Globe in the Best Animated Film category, The Illusionist tells the story of one of a dying breed of stage entertainers in the late 1950s. In a world of emerging rock stars, he is forced to accept increasingly obscure assignments in fringe theatres, garden parties and remote bars and cafes. However, it's while performing in a pub off the west coast of Scotland that he meets Alice, an innocent young girl who still very much believes in the Illusionist's kind of magic.

Enchanted by Alice's enthusiasm for his act, the iIllusionist doesn't turn Alice away when she follows him to Edinburgh in admiration. Desperate to keep the illusion of his magic alive, he showers Alice with gifts he has 'conjured' into existence, almost driving him to ruin. However, as Alice grows up, both are forced to face their own realities.

Written as a letter from Tati to his daughter, The Illustionist will capture the imagination and the emotion of viewers of all ages. A modern classic, The Illusionist is not to be missed when it's released on DVD in February.