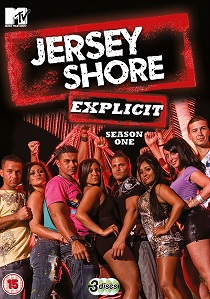 Here's "The Situation", MTV's reality hit, Jersey Shore: Season One is making its way to DVD on 21st February 2011 from Paramount Home Entertainment. Packed full of never-been-seen extra features, this three-disc set is a must own for any reality fan. Plus now you can indulge in this pop culture phenomenon from the very beginning with every explicit episode, and get the inside scoop with exclusive cast commentary from The Situation, Snooki and Pauly D.

Jersey Shore: Season One follows eight young adults put together in a house in Seaside Heights, New Jersey - a popular East Coast summer hot spot - going about their regular business. The result was often surprising, hilarious, over-the-top content that became an overnight sensation as a national audience fell in love with The Situation, Snooki, Pauly D., JWOWW, Ronnie, Sammi Sweetheart, Vinny and Angelina. Watch agape as fights ensue, love triangles are formed, and as the cast juggle their work schedule whilst taking advantage of the Jersey Shore nightlife scene. Beyond the tanning, muscles and fist pumping, viewers learn there is more to this cast as they form a loyalty and bond that will last beyond their time in Seaside Heights.

Jersey Shore: Season One was the #1 original cable series among 12 to 34 year-old viewers in the States and the Season One finale broke series records. Fans also took their love of Jersey Shore online, with over 6 million fans on Facebook and 22,000 Twitter followers - why not join in the fun today?