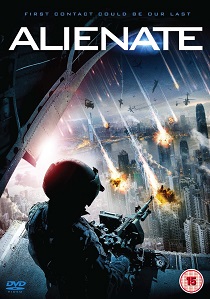 With big action and even bigger ideas, Alienate is stacked from start to finish with thrilling suspense that will have you dusting off your copies of Independence Day and X-Files to ask yourself the all time important question, do you believe...?

Alienate continues in the footsteps of modern sci-fi action classics Monsters and Cloverfield to explore exciting new territory for the genre.

David leaves home for a business trip. When aeroplanes start mysteriously falling out of the sky and cell towers fail, he finds himself trapped. With the Earth falling to an alien invasion, David fights to return to whatever is left of his home and marriage.

Blending the suspense of Monsters with the intelligent action assault of Independence Day, Alienate, is released on DVD by Altitude Film Entertainment on 22nd February 2016.