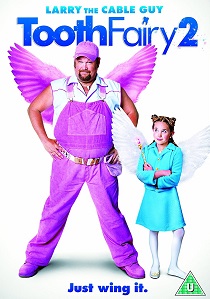 Believe in the wisdom of teeth this year as fantasy collides with reality in the hilarious Tooth Fairy 2, available on DVD on 12th March 2012, courtesy of Twentieth Century Fox Home Entertainment.

When dreamer Larry Guthrie (Larry The Cable Guy - Cars, Cars 2) loses his first love to the town hot shot, he decides to tug at her heart strings and win her back by volunteering to help the local kids at her after-school club. However, when Larry accidentally tells the kids that the Tooth Fairy isn't real he is soon transformed into a pink-winged fairy and sentenced to do the job of the Tooth Fairy until he has learned his lesson!

The perfect family film this spring, Tooth Fairy 2 is jam-packed with dental dichotomies and hilarious extra features, including an unforgettable introduction to your all-new Tooth Fairy in Larry The Hairy Fairy. What's more, Tooth Fairy 2 is also available as part of a special double-pack that also includes the Dwayne Johnson-starring original Tooth Fairy.