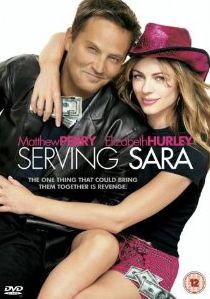 Joe Tyler is down on his luck. Once a successful lawyer with all of the trappings that go with plenty of money, he's now a lowly, but good, New York process server. Nothing seems to be going right and he's taking far too long in serving the court papers to his ever more elusive recipients. Despite Joe's poor performance his boss decides to give him one last chance. So, to the annoyance of his work colleague Tony, he gives him an important big money making assignment.

The assignment is a straightforward enough. All he has to do is cross New York and serve some divorce papers to Sara Moore, the British wife of Texan multi-millionaire Gordon Moore. However, Tony has had enough of Joe and he rings Sara at her apartment to warn her of the impending papers. Naturally, when Joe arrives Sara is in a hurry to leave and the simple job instantly becomes more complicated. Determined not to be outdone Joe finally manages to trace her down to a friends house in the suburbs and serves the papers.

But in a quirk of the divorce laws, if the papers are served by her Texan based husband first the divorce will be processed in Texas and thus Sara would not be entitled to a multi-million dollar settlement. However, if Sara were to serve her husband first, New York law would preside and she'd be entitled to a handsome payout. So, determined not to loose out on the settlement Sara tries to bribe Joe with one million dollars if he were to serve Gordon first. Joe accepts the offer and as the couple chase Gordon across Texas with Sara's divorce papers, Tony is hot on their heels with Gordon's divorce papers.

The picture it is bright and colourful with a fair level of detail throughout. There are a few occasions where the picture can be a little on the grainy site, but the print is clean with no real signs of dust scratches or other imperfections. The bit-rate remains below average throughout the film but with little to challenge the encoding process the picture is free from any pixelisation or signs of artifacting.

The sound department is not going to provide your surround system with anything too taxing, and if anything you could probably dispense with it completely. The majority of the action is concentrated in centre channel and very little wanders to either the front or rear channels. The actual level of the dialogue is reasonable enough and once a comfortable setting is found there was little need to keep adjusting the levels. However, it was sometimes hard to pick out Liz Hurley's dialogue, but I'm putting this down to her over emphasising her British accent.

If, like me, you're the suspicious type, whenever a substandard film is released on DVD with a truck load of extras it tends to stick out like a sore thumb as a shameless attempt to boost sales. And guess what, there's a fleet of trucks on this disc. It even goes a step further by adding an entirely different film to the package! Never the less, the extras do actually manage to add value to the package with a host of extras which include deleted scenes, outtakes and a rather enthusiastic audio commentary. And let's not forget that no DVD would be complete without the ubiquitous theatrical trailer.

To say that this film sank quicker than the Titanic would be a bit of an understatement. However, I find this a little odd especially when you consider Matthew Perry's popularity and Liz Hurley's good looks. I don't know whether its failure to draw the crowds in America resulted in its treatment in the UK but you would have thought there would have been some interest from the "Friends effect". However, that's not saying that this film is a total stinker because it does have its moments.

During publicity interviews Matthew Perry made it clear that he was trying to avoid his character in Friends. He obviously didn't listed to himself as he's most definitely Chandler and, for me, that is what makes this below par film more watchable that it really should. However, both Liz Hurley and Matthew Perry are overshadowed by the hilarious performances by Cedric the Entertainer (what a great name!) as Joe's long suffering boss and Vincent Pastore as the bumbling Tony. In order to overshadow a comedy actor with the abilities of Matthew Perry's you really must place the blame squarely on the script.

You'd probably be correct in thinking that Matthew Perry fans will buy this disc without questioning it too much, but for the rest of us there has to be a bit more carrot dangling. As a result it's being sold as a special Liz Hurley Doublepack which includes the excellent Bedazzled. Now its all starting to sound interesting. Forget Matthew Perry, you've got twice the gorgeous Liz Hurley and if that's not enough to get men into their local DVD store then little else will.