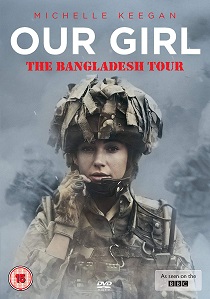 Michelle Keegan reports for service once again as Corporal Georgie Lane in hit BBC drama Our Girl which returns for the next thrilling tours of duty - Nigeria, Belize and Bangladesh. Following their run on BBC One, the compete third series including Nepal tour are set to arrive on DVD as Our Girl: Complete Series Three alongside Our Girl The Complete Collection 1 - 3 Box Set courtesy of Acorn Media International.

One of the most successful primetime dramas on BBC One, this powerful series charts the gripping highs and lows of eponymous heroine Georgie Lane played by Coronation Street favourite Michelle Keegan (Tina and Bobby). A Stockport-born medic in the British Army, she is a hugely popular and respected member of the close-knit Two Section who undertake missions, both combat and humanitarian all over the world.

This riveting 12-part series follows our brave and resilient heroine as she undertakes more demanding medical work, under extreme conditions in Nepal, Nigeria, Belize and Bangladesh.

In a post - earthquake Nepal, Georgie mentors Maisie (Shalom Brune-Franklin; Doctor, Doctor), a reckless young recruit and finds herself perhaps too close to Milan (Rudi Dharmalingam; Rellik), a young engineer. But the aftershocks of the earthquake are nothing compared to the tremors she feels when she runs into her ex - fiance? Elvis (Luke Pasqualino; The Musketeers); and Two Section are soon led into conflict with a dangerous criminal gang.

In Nigeria, Georgie comes up against the terrorist group Boko Haram and finds herself in peril when she goes off grid and is kidnapped by the armed rebels. Recuperating in Belize, Two Section undertakes a jungle training exercise which becomes life - threatening and then turns deadly.

Posted to Bangladesh, Two Section get to work in a refugee camp for families fleeing Myanmar and are faced with a world of desperation and corruption. A planted bomb decimates the team, who then face a cholera outbreak in the camp. Will Captain James Ben Aldridge (Fleabag), and Georgie manage to sidestep the feelings they appear to have for each other in a world spinning out of their control?

HotUHD
After moving to a new town, two brothers discover that the area is a haven for vampires as the classic The Lost Boys is released on 4K UHD 20th September 2022 from Warner Home Video. END_OF_DOCUMENT_TOKEN_TO_BE_REPLACED
Top PicksView