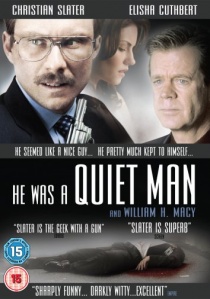 NewsComedyRomanceThrillerChristian Slater
News Article Go back to homepage
The third feature from director Frank A. Cappello, He Was A Quiet Man, released by High Fliers on 26th May 2008, stars Christian Slater, William H. Macy and Elisha Cuthbert in the compelling story of a disturbed nobody whose life is changed profoundly when his homicidal plans are thwarted by a bizarre but timely twist of fate
Elisha Cuthbert, John Gulager, Anzu Lawson, Jamison Jones, Christian Slater, Michael DeLuise
Frank A. Cappello
Teresa Zales, Michael Leahy, Jason Hallock, Frank A. Cappello
High Fliers
1 hour 35 minutes
26/05/2008
Thank you for supporting DVD365.net when you order using the link(s) below. As an Amazon Associate we earn from qualifying purchases
Buy DVD
Information

The third feature from director Frank A. Cappello (screenwriter of Constantine and director of No Way Back and American Yakuza), He Was A Quiet Man, released by High Fliers on 26th May 2008, stars Christian Slater (Bobby; The Good Shepherd), William H. Macy (Bobby; Thank You For Smoking; Edmond) and Elisha Cuthbert (Captivity; 24) in the compelling story of a disturbed nobody whose life is changed profoundly when his homicidal plans are thwarted by a bizarre but timely twist of fate.

Slater, playing against leading man type and virtually unrecognisable under subtle but superb make-up, stars as Bob Maconel, a disgruntled office drone constantly struggling from one bad day at work to another. Trapped in his dull cubicle, mostly ignored by his co-workers and bullied by his superiors, Bob daydreams of "going postal" on them all before ending his own miserable existence. But before he can find the courage to make his dream a reality, he finds himself unexpectedly transformed from all-round loser and potential killer into accidental hero when another stressed out employee beats him to the punch and opens fire.

Rewarded with both a promotion by the head of the company, Shelby (Macy), and with the affections of Vanessa (Cuthbert), his secret office crush who has been left paralyzed by the shooting, Bob begins to see life in a completely different light. Unfortunately, going from zero to hero in the blink of an eye has its downside and soon Bob finds himself closer to the edge than ever before.

A hit with audiences when it was screened at Austin's SXSW Film Festival earlier this year, with Screen Daily hailing it as "an excellent, unpredictable and often extremely witty film", Time Out favourably comparing it to such similarly off-beat films as Fight Club, Brazil and Amelie, and Variety praising Slater's "implosive, fearlessly self-effacing performance", He Was A Quiet Man is a unique film experience.

An audacious and highly original work that is part love story, part black comedy and part surreal thriller, it also serves to reaffirm Christian Slater as one of the most versatile young actors of his generation.