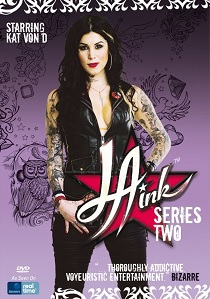 A year after opening her own shop, Kat Von D's life has blown up and business at LA Ink is booming. Now Revelation is releasing the voyeuristic LA Ink: Series Two on 22nd February 2009.

Kat and her core group of artists, Corey Miller, Hannah Aitchison and Kim Saigh, have established the shop as one of the foremost in LA. She's got her own make-up line and a new man in her life - rocker Nikki Sixx of Mötley Crüe.

But her hectic schedule makes running her business alone impossible. She brings in her good friend Naheed as general manager of the shop and hopes that working together won't ruin their relationship.

Meanwhile, Hannah tries to turn the crew at the shop into comic characters, Corey lives out his dream by creating a custom drum kit and Kim turns her fantasy of joining the circus into reality. Kat's life won't slow down as she goes on the road with Nikki for Crüe Fest, makes the cover of Latina magazine and writes a book about her life through her tattoos.