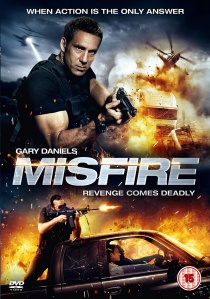 Hardened DEA agent Cole (Daniels - The Expendables) is sucked into the deadly underworld of Tijuana in search of his ex-wife, a journalist who may have gone too far in search of a story. Cole discovers his wife has been abducted by a charismatic Cartel boss, a man who publicly aspires to run for office, but privately slaughters anyone who gets in his way. In a place where two cultures clash and life is cheaper than bullets, Cole is about to discover the cost of shooting to kill when you Misfire. Eastenders' star Michael Greco appears as Cole's brother.

Misfire is a high-octane thrill ride where the action never stops.