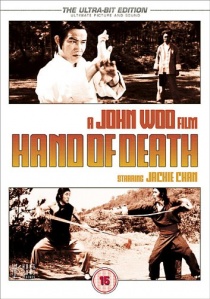 With the release of John Woo's Hand Of Death : Ultra-Bit Edition on 15th January 2007 on DVD, Hong Kong Legends continue their commitment to offer fans the very best in martial arts filmmaking presented like never before.

From now on fans can expect kung fu classics new to Hong Kong Legends to be released in HKL Ultra-Bit allowing for the very best in picture and sound quality by using a new super bit rate encoding for the exhaustively restored picture and sound to really shine through.

Hong Kong Legends have long been associated with showcasing films to their best and by using Ultra-Bit can ensure that when fans want to watch their favourite movies they will always want to reach for the HKL Ultra-Bit edition. Accompanying selected classics will be new specially commissioned expert audio commentaries to offer a thorough and entertaining insight into legendary films of the genre.

From John Woo, the director of Hong Kong movie classics including Bullet in the Head and The Killer, comes Hand Of Death; his unique take on the period martial arts movie genre. This is probably the first and last time you'll ever be able to hold a DVD of a film directed by John Woo that features kung fu legends Jackie Chan, Sammo Hung and Yuen Biao!

Their foe is none other than the formidable James Tien (Game of Death) who wants to wipe all Shaolin men from the face of China. Leading the charge is Tan Tao-Liang as Yun Fei in a fascinating movie filled with moments that echo throughout Woo's subsequent career.

Packed with extensive fights using varied disciplines it's an early showcase for all the performers (in particular Jackie Chan) and a chance to rediscover an early star of the scene: the super-kicking Tan Tao-Liang in a great performance that shows just why his nickname was 'Flash Legs'. In common with the most entertaining Woo films it's the final half-hour showdown that really kicks ass in typically brutal style so watch out!