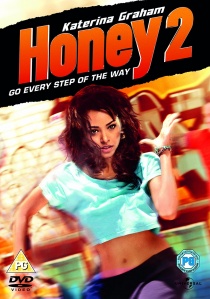 This inspiring dance sequel features dramatic dance duos, pumping tunes, a heated romance and a high impact dance off that brings the world of street dance battles straight into your living room. With fierce, free-styling girls and b-boying guys breaking it down with killer moves, Honey 2 is an energetic insight into the world of American street dance with a kicking soundtrack to get you dancing along.

The Blu-ray disc generously contains the first Honey film (staring Jessica Alba) as an exclusive feature offering dance fans the chance to revisit the original film sensation that followed NYC's legendary dancer Honey Daniels on her journey to success. In addition, the Honey 2 DVD and Blu-ray contains hours of electric bonus features including dance sequences, behind the dance crew's footage and the making of Honey 2 featurettes.

Also guaranteed to keep you entertained is the film's music selection featuring unique hits from talented artists such as Nellie, Keri Hilson and Estelle as well as a special appearance from American's Got Talent's Alexis Jordan.

Honey 2 features a vibrant cast of young up-coming stars including Katerina Graham (Vampire Diaries), Seychelle Gabriel (The Last Airbender), Randy Wayne (True Blood) and Melissa Molinaro (Pussycat Dolls Present: The Search For the Next Doll) as well as appearances from Audrina Patridge (The Hills) and American Sweetheart Mario Lopez (Saved By The Bell and Dancing with the Stars).

After a run in with the police, aspiring dancer Maria Ramirez is released from Juvenile detention and is forced to live with Connie, the mother of renowned dancer and choreographer Honey Daniels. As part of her probation Maria has to work at the Honey Daniels Street Dance School where she meets a group of talented dancers. Maria quickly catches the eye of a particular pretty-boy dancer, Brandon, although not all of his crew warm to her immediately.

On a night out in town Maria bumps into Brandon at a club as well as her no-good ex-boyfriend Luis, the overly confident leader of the 718 dance crew. In an attempt to prove that she has moved on she decides to show off her dancing skills and steamy moves on the dancer, Brandon.

Although bad boy Luis attempts to prove that he has changed his ways and convince her to join his dance group, she instead joins the Honey Daniels Street Dance School. Armed with her feisty attitude and desire to prove herself, Maria choreographs the team to prepare them to compete against Luis and his 718 group in the renowned 'Dance or Die' television competition. Returning to her dance routes and becoming part of an ambitious and talented team, Maria soon discovers her purpose and passion in life.