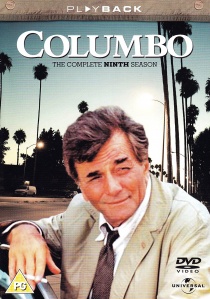 The man in the most infamous mac in the world is back to solve another string of crime capers when Columbo Season 9 is released on DVD on 30th March 2009 courtesy of Universal Playback. Starring five times Emmy® and Golden Globe® award winning Peter Falk in the title role. Columbo won a Golden Globe® for the Best Television Drama Series in 1972, and is still aired on TV channels in 30 countries around the globe, confirming Columbo's status as possibly the world's most beloved detective in TV drama history.

Shabbily-dressed and seemingly slow-witted, homicide detective Columbo's (Peter Falk) fumbling and overly polite manner made him an unlikely choice to solve any crime in the Los Angeles Police Department, let alone complex murders. Often underestimated by his fellow officers, and by the murderer du jour, his demeanour is revealed to be a complex act. Hidden beneath this unlikely exterior lie's a brilliant detective with an eye for minute details and the ability to piece together seemingly unrelated incidences and information to solve crimes.

The audience witnesses a murder at the beginning of each episode and Columbo most often confirms a criminal's guilt by lulling them into a false sense of security and then setting up circumstances which encourage them, in their newfound hubris, to incriminate themselves. Columbo's signature interrogation technique is to conduct a seemingly innocuous interview, politely conclude it, and exit the scene, only to stop in the doorway and ask, "Just one more thing...". This always leads to a jarring question regarding an inconsistency in either the crime scene or the suspect's alibi. In some episodes, murderers who believed they had committed the "perfect crime" congratulate Columbo before being arrested.

The programme is noted by TV critics for the way it reversed the cliché of the standard "whodunit" mystery, occasionally referring to it as a "howcatchem", though it is more properly known as an inverted detective story, a subgenre created by British writer Richard Austin Freeman.

Highlight episodes from Season 9 include:

Columbo Cries Wolf Columbo is asked to investigate the disappearance of Diane Hunter, director of men's magazine "Bachelor's World", a showcase of the world's most beautiful young women. Naturally, the prime suspect is her lover and co-editor Sean Brantley, who spends a lot of time with the young girls he works with.

Rest in Peace, Mrs. Columbo Columbo unwittingly becomes part of a deranged woman's diabolical plot to destroy the two men she believes responsible for her husband's death in prison. After murdering one, she moves in on the other Columbo. She plans to kill the person closest to him, his wife.

Uneasy Lies the Crown Columbo must outwit a cunning dentist, who has set up his wife for a murder in order to keep up his image and expensive lifestyle.

Murder in Malibu An ambitious womaniser, rejected by the romance novelist he planned to marry, ends the story she was writing with a gun and makes the murder look like robbery gone awry.

The enthralling and not to be missed Columbo Season 9 is yours to own on 30th March 2009. Each episode features a standalone plot line so it's accessible to newcomers but it also provides fresh and exciting storylines for long term fans of the show.