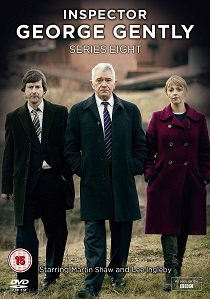 Based on the classic detective novels by Alan Hunter, the series follows Detective Inspector George Gently (Martin Shaw - Judge John Deed), who, after the death of his wife, moves up North to solve one more case, but ends up staying. Partnered by Detective Inspector Bacchus (Lee Ingleby - Line of Duty), they investigate cases in Newcastle upon Tyne, Northumberland and County Durham, in the swinging sixties and beyond. With their prickly relationship, that comes with warmth and humour, the pair are a winning police partnership and are joined by the feisty Detective Sergeant Rachel Coles (Lisa McGrillis - Hebburn).

For the final series we join DI George Gently in 1970. It's the start of a new decade, Heath has just won a narrow victory for the Conservatives at the General Election on a platform of peace and prosperity by taking us into Europe. But there's radical change for women, political paranoia in the Cold War - and industrial unrest in the air.

Episode One - Gently Liberated When a body found in a chemical storage tank is identified as the late husband of convicted killer Eve Liddell, DCI Gently controversially decides to re-investigate the eight year-old case. But DI Bacchus is vehemently opposed to his mentor's decision, not least because he was on the original investigation. Will Gently and Bacchus be able to heal the widening rift between them before Gently's impending retirement? And will the team finally prove beyond doubt the identity of the killer?

Episode Two - Gently and the New Age Gently is about to retire when he is approached by a covert police unit with one last tantalising offer. The cold case of a young girl murdered four years ago in Washington, County Durham, finds Gently tracking Clements, a charismatic politician. When the investigation leads to a murky web of unions and political intrigue will Gently do the unthinkable and bend the course of justice? And faced with mortal danger how will Gently and his team survive?

Get on the case with this gripping detective series.