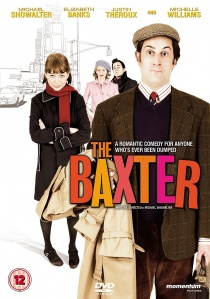 NewsComedyRomance
News Article Go back to homepage
A laugh out loud comedy that will strike a chord with anyone who has ever been dumped, The Baxter is yours to own from 2nd March 2009 courtesy of Momentum Pictures.
Michael Ian Black, Zak Orth, Justin Theroux, Michelle Williams, Elizabeth Banks, Michael Showalter
Michael Showalter
Erin Owens, Galt Niederhoffer, Caroline Kaplan, Holly Becker
Momentum Pictures
1 hour 31 minutes
02/03/2009
As an Amazon Associate we earn from qualifying purchases.
Buy DVD
Information

A laugh out loud comedy that will strike a chord with anyone who has ever been dumped, The Baxter is yours to own from 2nd March 2009 courtesy of Momentum Pictures.

The Baxter stars Comedy Central funny-man Michael Showalter (Stella, The State, Signs, Sex and the City, Reno: 911 Miami) as "the baxter" Elliot Sherman, the perennial loser-in-love - through high school, college and business school, his relationships have always ended the same way, i.e. some macho stud would swoop and take Elliot's girl as he watched helplessly from the sidelines.

So if you've had enough of taking it like a man, watch The Baxter, a hilarious love story for underdogs everywhere.

Elliot Sherman (Showalter) has it all, a prosperous career, a devoted secretary (Williams) and a beautiful bride to be (Banks). However, when Bradley (Theroux), his fiancé's high-school sweetheart, shows up Elliot must fight against becoming "the baxter", a sad loser left at the wedding-altar. Before long, Elliot is struggling to compete with the charismatically smarmy Bradley and must think up more hilariously absurd plans to keep his girl.

UHD
Based on the global blockbuster videogame franchise from Sega, Sonic The Hedgehog, released on DVD, Blu-ray and 4K UHD from 8th June 2020 from Paramount Home Entertainment, tells the story of the ... END_OF_DOCUMENT_TOKEN_TO_BE_REPLACED
Top PicksView