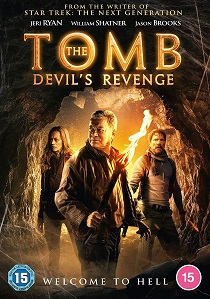 John Brock is a down-on-his-luck archaeologist who returns from an expedition to the caves of rural Kentucky after unsuccessfully trying to locate a mysterious relic that his family has sought for generations.

Upon his return, John starts to see dream-like visions of a ferocious bird-like creature from ancient folklore. John soon learns that the cave he came into contact with on his last expedition was indeed the cave that contains the relic and also a portal to Hell and a place of worship for the Occult.

John discovers that the only way tostop the increasingly realistic visions is to go back to the cave with his family, find the relic once and for all, and destroy it.

DVD
In Your Honor, released on DVD 31st May 2021 from Paramount Home Entertainment, Bryan Cranston stars as a New Orleans judge who is forced to confront his own deepest convictions when his son is ... END_OF_DOCUMENT_TOKEN_TO_BE_REPLACED
Top PicksView

From the producers of Shaun Of The Dead, Hot Fuzz, Scott Pilgrim Vs. The World and Paul comes Attack The Block, a fast, funny, frightening action adventure movie that pits a teen gang against an invasion of savage alien monsters. It turns a London housing estate into a sci-fi playground. A tower block into a fortress under siege. And ...