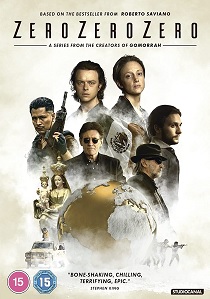 From the team behind the acclaimed series Gomorrah, Gabriel Byrne, Dane DeHaan and Andrea Riseborough star in ZeroZeroZero, the gripping eight-part crime drama about the international cocaine trade and its consequences.

Inspired by the investigative book by best-selling author Roberto Saviano, the series follows the journey of a cocaine shipment from the narcos in Mexico to a powerful Italian cartel via an American shipping company.

An epic power struggle begins, involving everyone from the corner dealers up to the heads of international organised crime, and as the dramatic conclusion approaches their lives and livelihoods all hang in the balance.

ZeroZeroZero is released on DVD and Blu-ray 12th April 2021 from StudioCanal.

HotUHD
A decade-defining classic from the imagination of Steven Spielberg and Chris Columbus, celebrating its 35 year anniversary, The Goonies is released on 4K UHD 31st August 2020 from Warner Home Video. END_OF_DOCUMENT_TOKEN_TO_BE_REPLACED
Top PicksView