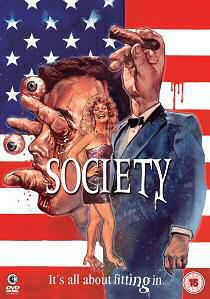 Director Brian Yuzna's Society is one of the most shocking films of the 80s and now it's getting the high def treatment with its long-awaited Blu-ray release from Second Sight Films.

With a brand new 4K restoration Society can now be seen in its full gory glory right through to its legendary finale, that has to be seen to be believed. It will be released on Blu-ray and DVD complete with a slew of newly created special features and a limited edition Blu-ray slipcase with specially commissioned artwork by Graham Humphries on 31 March 2014.

Despite his family's privileged Beverly Hills lifestyle troubled teen Bill Whitney has always had a problem with 'fitting in'. His parents and sister seem disturbingly alien to him and lately he's witnessing some increasingly strange behaviour. His paranoia is soon justified, but nothing can prepare him for the unimaginable, depraved and perverse excesses that will be found beneath the surface of this 'elite' society.