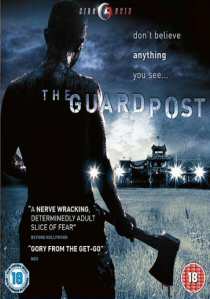 NewsScience FictionHorrorThriller
News Article Go back to homepage
From Su-chang Kong, one of the most original filmmakers working in Asian cinema today and director of the critically acclaimed Korean shocker R-Point, comes The Guard Post (aka GP506) released on Blu-ray by Cine Asia on 29th December 2008.
Byeong-cheol Kim, Byeong-Cheol Do, Kyoo-Hwan Choi, Jin-Woong Cho, Hyun-jae Cho, Ho-jin Chun
Su-chang Kong
Cine Asia
2 hours 1 minutes
29/12/2008
Thank you for supporting DVD365.net when you order using the link(s) below. As an Amazon Associate we earn from qualifying purchases
Buy DVD
Buy BD
Information

Released on Blu-ray by Cine Asia on 29th December 2008, from Su-chang Kong, director of the critically acclaimed Korean shocker R-Point, comes The Guard Post (aka GP506), a similarly genre-bending foray into the cinema of fear that further cements his reputation as one of the most original filmmakers working in Asian cinema today.

Already a hit on DVD, The Guard Post is now coming to Blu-ray, adding a whole new in-your-face dimension to this gore-drenched chiller. Combining the claustrophobic atmospherics of 'The Orphanage' with the tense paranoia of 'The Thing', Kong's latest is part murder-mystery, part horror story -- a terrifying tale of a group of soldiers caught up in a mysterious and haunting vortex of desperate alienation and homicidal madness.

When communications with a secret guard post situated on the North-South Korean border unexpectedly fall silent, an army platoon headed by a military investigator is dispatched overnight to re-establish contact with their fellow soldiers, one of whom is the son of the army's Chief of Staff. On arrival at GP506 they discover the aftermath of a gruesome bloodbath and one lonely survivor who they hope can provide the answer to the mystery behind the massacre.

Shocked by the horror of the event and eager to cover up the incident, the top brass at Army HQ order the incineration of the guard post and the destruction of any evidence relating the incident. With just hours to go before the order is due to be executed, the investigative team finds itself in a race against time to uncover the truth, which they believe must be hidden somewhere within the remote outpost and its maze of underground tunnels. But the countdown to dawn proves to be the least of their concerns when it becomes apparent that the deadly effects of the terror lurking within the guard post have only just begin.

Having already established himself as a horror director to watch with R-Point, Su-chang Kong ups the ante with The Guard Post, a chiller that brilliantly plays on the primal human fear of the unknown while cleverly applying the conventions of the classic investigative thriller genre to a full-on horror story with all the necessary trappings.