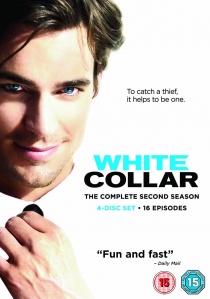 Having played cat and mouse for years, the double-act are faced with a host of new perplexing cases with plenty of thrills and twists along the way. Adding depth and intrigue to the season are other cast members Willie Garson (Hot in Cleveland, Sex and the City), Sharif Atkins (House, The Good Wife) and Tiffani Thiessen (What About Brian, Pandemic).

The fast-paced second season kick starts with the aftermath of Neal's failed getaway and Kate's death, as Neal is sent back to prison and Peter faces a full inquiry from the Department of Justice.

Get investigative with Matt Bomer and let this critically acclaimed drama steal your attention when Season Two arrives on DVD this February, packed with extra features including deleted scenes, commentaries

BD
After moving to a new town, two brothers discover that the area is a haven for vampires as the classic The Lost Boys is released on 4K UHD 20th September 2022 from Warner Home Video. END_OF_DOCUMENT_TOKEN_TO_BE_REPLACED
Top PicksView