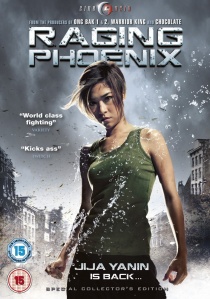 Following the phenomenal success of her explosive screen debut in Chocolate, Thailand's young female martial arts sensation Jija Yanin returns to the screen in Raging Phoenix, released on DVD and Blu-ray by Cine Asia on 12th April 2010, the awe-inspiring action-adventure that takes the full-contact combat thrills seen in Chocolate to an inventive and unprecedented level.

Yanin stars as Deu, a rock and roll drummer abandoned by her family and recently sacked from her band, who finds herself being pursued by a gang of kidnappers. She is rescued from their clutches by Sanim, a master of an obscure drunken fighting technique known as Mayraiyuth. After informing Deu that she is the target of the Jaguar Gang, a group of criminals who kidnap young women and extract their pheromones to sell as a potent aphrodisiac on the black market, Sanim and his three sidekicks - Pigsh*t, Dogsh*t and Bullsh*t agree to train her in their unique methods of combat.

Her training complete, Deu insists on joining Sanim and the others in infiltrating the Jaguar Gang's underground lair and bringing down their lucrative and exploitative people trafficking empire. Their mission brings them face to face with a horde of murderous thugs led by a fearsome she-boss who proves to be more than a match for Deu and her new friends, all of whom have their own scores to settle with this most deadly of foes.

DVD
The BAFTA-winning hit Unforgotten, released on DVD 26th April 2021 from BBC Worldwide, returns for a fourth series, as Cassie and Sunny investigate a cold case with alarming links to the police force. END_OF_DOCUMENT_TOKEN_TO_BE_REPLACED
Top PicksView