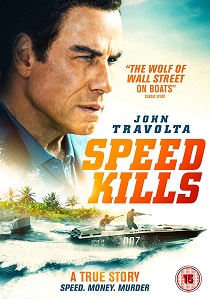 From the makers of The Mechanic and The Iceman, Miami Vice meets The Wolf of Wall Street as superstar John Travolta stars alongside Vikings' Katheryn Winnick in the high-octane true-crime biopic Speed Kills, released on DVD 21st January 2019.

John Travolta (Grease, Gotti), stars as a speedboat racing champion and multimillionaire whose secret life as a drug trafficker lands him in a deadly crossfire between the DEA and the Mob.

Spanning the 1960s to the 1980s, set in glitzy, glamorous and blood-soaked Miami, this is a dazzling, dangerous slice of American gangster cinema, that recalls Scorsese's true crime classics Goodfellas and Casino, and boasts a fantastic lead performance from Travolta, at his charismatic best as a construction boss who moves to Florida and becomes involved with a potential lethal pastime of racing speedboats, and the even more lethal local mob.

Strap yourselves in for a wild ride of corruption, high speed boats, sex, drugs and double-crossing!

DVD
In Brian And Charles, released on DVD and Blu-ray 10th October 2022 from Mediumrare, an inventor lives alone in a remote village in the countryside, inventing useless things out of found objects in his garage. That is until ... END_OF_DOCUMENT_TOKEN_TO_BE_REPLACED
Top PicksView