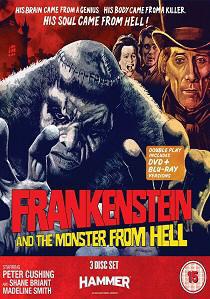 Frankenstein And The Monster From Hell (1974)

Convicted of bodysnatching and using the body parts of his ill-gotten cadavers for research, Dr. Simon Helder is sentenced to five years in an insane asylum. On arrival, he recognises the penitentiary's resident surgeon as none other than the infamous Baron Victor Frankenstein, who has been hiding out there and continuing his research into the reanimation of corpses under the pseudonym of Dr. Carl Victor.

Recognising Helder's surgical skills, Frankenstein enlists the young doctor as his assistant under the pretext of their tending to the medical needs of their fellow inmates. But the reality of the situation is far more sinister. Frankenstein is already well on his way to creating a new living creature assembled from the vital organs of murdered criminals and madmen.

Frankenstein And The Monster From Hell is released on DVD and Blu-ray on 28th April 2014, courtesy of Icon Home Entertainment.

UHD
Phil Lord and Christopher Miller, the creative minds behind The Lego Movie and 21 Jump Street, bring their unique sensibilities to a fresh version of a different Spider-Man Universe with Spider-Man: ... END_OF_DOCUMENT_TOKEN_TO_BE_REPLACED
Hot PicksView