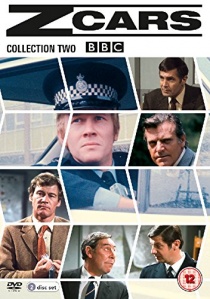 Z Cars is the ground-breaking cop show that took police drama to a new level with its gritty realism. Following the success of its first collection, the Acorn label of RLJ Entertainment is thrilled to bring these long-lost classic episodes to DVD.

Series creator Troy Kennedy Martin, believed that the cop show genre needed 'an injection of energy and bite' and that's what Z Cars had in spades. Making its TV debut on the BBC in 1962, it went on to become one of the longest running British TV shows airing until 1978.

Z Cars Collection Two features the 1972 episodes Witness; Takes all Sorts; Sins of the Father; Damage; Day Trip and Public Relations. It makes it DVD debut on 7th July 2014, complete with some excellent bonus material including new interviews with some of the show's stars: Ian Cullen, Douglas Fielding, Geoffrey Hayes and Gary Watson, along with a tribute to the late James Ellis best known for his long standing Z Cars character Sgt. Bert Lynch.

Set in Newtown, a fictional town to the North of Liverpool, these episodes star James Ellis (Re-Animator, Priest) as Sergeant Lynch who played this character throughout the entire run of the show, alongside John Slater (Passport To Pimlico, The Flanagan Boy), Ian Cullen (Dawn of the Dragonslayer, Family Affairs), Douglas Fielding (EastEnders, Holding On), Gary Watson (The Three Musketeers, Doctor Who) and Geoffrey Hayes (Rainbow).

The team from Z Cars take on crimes as varied as a witness to armed robbery threatened by gangsters; the case of the runaway dumper and the damaged Panda; a lone woman's warped revenge on a hapless burglar; a criminal inheritance on the estates that leads to new crime in Newtown; and more.

It's a hard world and a 24-hour day for the poice that man these streets. But they're here so you can sit back, buckle-up and let the criminal underworld of Newtown know that Z Cars are on the way.

UHD
Fast forward to the 1980s as Wonder Woman's next big screen adventure finds her facing a wide array of foes including Max Lord and The Cheetah as Wonder Woman 1984 flies in on Blu-ray and 4K UHD 22nd March 2021 from Warner ... END_OF_DOCUMENT_TOKEN_TO_BE_REPLACED
Top PicksView