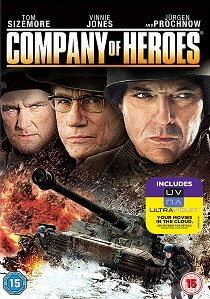 The highest rated strategy game of all time is now this year's action-filled World War II adventure as Company Of Heroes the movie charges onto Blu-ray and DVD with UltraViolet 25th March 2013 from SEGA and Sony Pictures Home Entertainment.

Based on the popular SEGA video game of the same name, Company Of Heroes the movie tells the pulse-pounding tale of an unlikely brotherhood of soldiers during the Battle of the Bulge, making a daring raid into the heart of Nazi Germany to stop Hitler from developing an atomic super weapon. Tom Sizemore (Black Hawk Down, Saving Private Ryan), Chad Collins (Lake Placid 2, Sniper Reloaded), Vinnie Jones (The Tomb, Snatch), Neal McDonough (Captain America: The First Avenger, Band of Brothers) and Jürgen Prochnow (The Da Vinci Code, Das Boot) lead an all-star cast in the first full-length film based on the popular gaming series, which continues later this year with the eagerly anticipated release of the award-winning second installment, Company of Heroes 2.

Both the Blu-ray and DVD of Company Of Heroes the movie arrive armed with heroic bonus features, including the featurettes In the Trenches: Filming Company of Heroes, a behind-the-scenes look at how the popular video game was made into a movie and Fabricating World War II, an in-depth look at the weapons and vehicles used and created for the film.

During the last major German offensive of World War II, a company of American soldiers is lost behind enemy lines during the Battle of the Bulge and they make a horrific discovery - Hitler has a super bomb in development. The soldiers soon learn about a secret allied mission to retrieve a defecting German scientist in charge of Hitler's weapons programme. Faced with impossible odds, the company and an escaping POW go on a daring raid into the heart of Nazi Germany in pursuit of the scientist.

Company Of Heroes the movie was written by David Reed. It was produced by Jeffrey Beach and Phillip Roth. It was directed by Don Michael Paul. It has a run time of approximately 110 minutes on Blu-ray and 96 minutes on DVD and is rated 15.