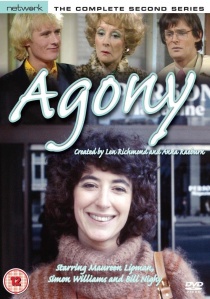 Network is proud to announce the release of Agony - The Complete Second Series on 12th May 2008. This witty BAFTA-nominated sitcom features Maureen Lipman (The Pianist) as sassy 'agony aunt' Jane Lucas, who finds that while dishing out advice to strangers is simple enough, sorting out one's own personal life can prove a lot more complicated.

Lipman earned a BAFTA nomination for the role and her wry yet warm comic delivery is sure to elicit both laughs and sympathy in what is a refreshingly bittersweet, nuanced show. The second series is comprised of seven episodes, complete and uncut, and will retail for RRP £14.99. In Series One, Jane must confront a situation she is accustomed to mediating from the outside: her psychiatrist husband Laurence (veteran television actor Simon Williams) announces he is leaving her to go 'find himself'. The two try to reconcile their differences but in series two their marriage is still on the rocks.

Throughout the seven half-hour episodes, Jane must juggle heartache, career-related stress (she both writes a column and hosts a radio show), constant demands from her widowed Jewish mother (Maria Charles - Never the Twain), and overbearing criticism from her bosses. Meanwhile, she finds comfort in her gay friends, Rob and Michael, and in the arms of charming journalist Vince (BAFTA- and Golden Globe-winning actor Bill Nighy).

Agony originally aired on ITV from 1979 to 1981 yet still comes across as a highly intelligent and progressive show; no wonder then that it has been retrospectively compared to the popular 1990s American sitcom Frasier.

DVD
A 13-year-old girl named Meilin turns into a giant red panda whenever she gets too excited in Disney and Pixar's 25th feature film Turning Red, released on DVD, Blu-ray and 4K UHD 2nd May 2022 from Walt Disney Home ... END_OF_DOCUMENT_TOKEN_TO_BE_REPLACED
Top PicksView