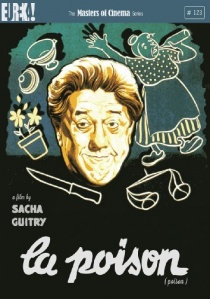 Eureka Entertainment have announced that they will be releasing a glorious new HD restoration of La Poison, the classic of '50s French cinema, directed by Sacha Guitry, the "total filmmaker" (writer/director/star) of tens of sophisticated comedies and who is considered by many the equal of the great Ernst Lubitsch.

Starring one of the greatest and most famous French actors of the 20th Century, Michel Simon (Boudu Saved from Drowning, L'Atalante), La Poison will be released on Blu-ray & DVD on 25th February 2013.

One of the great late period films by Sacha Guitry - the total auteur who delighted (and scandalised) the French public and inspired the French New Wave as a model for authorship as director-writer-star of screen and stage alike. In every one of his pictures (and almost every one served as a rueful examination of the war between the sexes), Guitry sculpted by way of a rapier wit - one might say by way of "the Guitry touch" - some of the most sophisticated black comedies ever conceived... and La Poison is one of his blackest.

Michel Simon plays Paul Braconnier, a man with designs on murdering his wife Blandine (Germaine Reuver) - a woman with similar designs on her husband. When Braconnier visits Paris to consult with a lawyer about the perfect way of killing a spouse - that is, the way in which he can get away with it - an acid comedy unfolds that reaches its peak in a courtroom scene for the ages.

From the moment of Guitry's trademark introduction of his principals in the opening credits and on through the brilliant performance by national treasure Michel Simon (of Renoir's Boudu sauvé des eaux and Vigo's L'Atalante, to mention only two high-water marks), here is fitting indication of why Guitry is considered by many the Gallic equal of Ernst Lubitsch. The Masters of Cinema Series is proud to introduce Sacha Guitry into the catalogue with La Poison for the first time on video in the UK in a dazzling new Gaumont restoration.