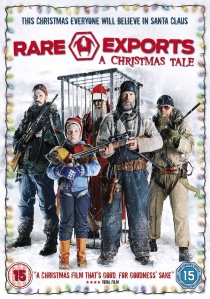 Described by Twitch as "a Christmas story for people who hate Christmas. executed with such audacious style and with such a big vision that it's impossible to watch without a big grin spreading across your face", Rare Exports: A Christmas Tale has been hailed as "an original, daring, carefully crafted film" (Roger Ebert, Chicago Sun-Times) "full of wonderfully twisted visions" (The Onion) and as "the best anti-Christmas Christmas film since Bad Santa" (Village Voice).

Driven by his curiosity regarding a supposed archeological excavation located on a mountain near his remote rural home, young and adventurous Pietari stumbles upon the shocking, ugly truth about the being known the world over as Santa Claus.

Local legend suggests the jolly old man in the red suit was in reality a supernatural creature that, rather than rewarding children for being good, severely punished those who were naughty. When a large herd of reindeer on which Pietari's father depends for his livelihood is found slaughtered, the townsfolk suspect it is the work of hungry wolves that have crossed into the area from the nearby slopes. But when all the local children mysteriously disappear overnight, Pietari fears the scientists on the mountain have unearthed something extremely sinister and very much alive from what is apparently "the largest burial mound in the world".

Elements of "The Thing" are combined with the adolescent adventure spirit of Gremlins, The Goonies and The Monster Squad in what Total Sci-Fi has called "a fun family fright flick" and Little White Lies regards as "one of the best (and most brutal) festive kid's films in years".