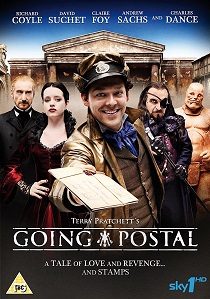 When con-artist Moist von Lipwig (Richard Coyle (Coupling, Prince of Persia) is sent to the hangman's noose, he doesn't expect to get beaten at his own game and fall through the trapdoor into a Government job.

Given the position of Postmaster, a role that hasn't been occupied in years, by ruler of Ankh-Morpork Lord Vetinari (Charles Dance Gosford Park, Bleak House), it's his daunting task to get the dilapidated Postal Service up and running again. Standing in his way is the Grand Trunk Clacks communication cartel and its leader, Reacher Gilt (David Suchet Poirot, The Way We Live Now). Taking on the evil monopoly, Moist must rise to challenge, ensure the delivery of the mail, restore hope to the people of Ankh-Morpok and even get the girl!

The DVD is available as a single disc version or a limited-edition two-disc set or Blu-ray packed with exclusive behind the scenes extras including; a gag reel, deleted scenes, director and producer commentaries and cast interviews. Bringing a piece of Terry Pratchett's unique magic into every home, the drama is perfect entertainment for old and young fans alike.

DVD
Quiz, the extraordinary and sensational story of how Charles and Diana Ingram attempted an 'audacious heist' on the quiz show 'Who Wants to Be a Millionaire?', is available to buy on DVD on 15th June ... END_OF_DOCUMENT_TOKEN_TO_BE_REPLACED
Hot PicksView