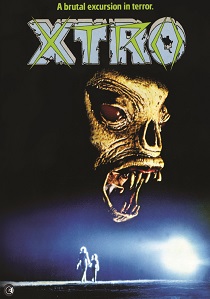 Part E.T., part Alien, British horror classic Xtro is one of the strangest, most shocking exploitation flicks to land on earth during the video nasty heyday. A film that narrowly avoided inclusion and prosecution on the original nasties list, threw in buckets of blood and gore and some of the most outlandish plot twists of the VHS era to create a truly memorable horror classic. Now it makes its arrival for the first time on Blu-ray courtesy of Second Sight Films as Xtro: Limited Edition Box Set.

Loved by horror fans, reviled by highbrow critics on its original release and one of the most notorious homegrown films of its time, Xtro lands on 18th June 2018 in a newly restored version complete with a raft of new extras, including an hour-long documentary charting the film's history and its impact, alongside its original alternate ending too.

Father Sam Phillips is playing with his family in the back garden of his idyllic English home when a bright light appears and seemingly abducts him. Three years later, the light returns and dumps a half human half alien creature. After slaughtering a couple who inadvertently stumble on it in a country road, the creature impregnates a woman who gives birth - in one of cinemas most outrageous scenes - to a fully formed Sam. He heads to London, seeking out his family and developing a strange bond with his son. And then things start to get really weird.

Xtro: Limited Edition Box Set features a preview of the new rebooted Xtro currently being worked on by original creators Harry Bromley-Davenport and Mark Forstater and will feature the notorious alien induced birth sequence looking clearer, sharper and more shocking than ever.

Can you stomach Xtro?

HotDVDBDDIGITAL
With stunning revelations, glamorous journeys, and the arrival of the Jazz Age, Downton Abbey: A New Era, released on DVD and Blu-ray 15th August 2022 from Warner Home Video, will be the Crawleys' biggest adventure yet as they grapple with their future and new intrigue about ... END_OF_DOCUMENT_TOKEN_TO_BE_REPLACED
Top PicksView