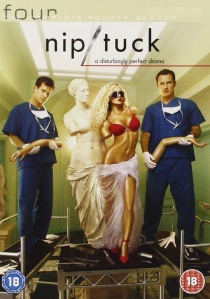 The doctors will see you now! On 13th August 2007 Drs. McNamara and Troy will prescribe a controversial 15-episode dose of the Golden Globe Award-Winning series Nip/Tuck when Warner Home Video releases Season Four of the exciting and provocative series on DVD.

One of the most groundbreaking and original programmes currently on television, Nip/Tuck returns to DVD with a scandalous fourth season filled with thrills, surprises and shocking moments. The three-disc DVD box set includes all fifteen episodes that drew rave reviews and big audiences when screened on SkyOne.

A host of A-list guest stars join the regular cast favourites Dylan Walsh, Julian McMahon, Joely Richardson & Roma Maffia to make Season Four the most enthralling yet. The exciting guest stars booking into the clinic for a little nip/tuck include Larry Hagman, Alanis Morisette, Rosie O'Donnell, Brooke Shields and several others. The series has fuelled the debate about cosmetic surgery, what it can and cannot bring to a patient's life and society's continued quest for spiritual contentment through physical perfection.

DVD
The end of the line is only the beginning in a wild, non-stop thrill ride through modern-day Japan as Bullet Train is released on DVD, Blu-ray and 4K UHD 24th October 2022 from Sony Pictures Home Entertainment END_OF_DOCUMENT_TOKEN_TO_BE_REPLACED
Top PicksView