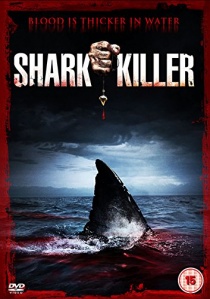 Violent, relentless and always waiting for the kill, the deadliest terror of the sea returns this summer in rip-roaring thriller Shark Killer.

When one of nature's most ruthless creatures threatens your beach, there's only one man to call: the lay-about ladies man, Shark Killer Chase Walker (Derek Theler, Baby Daddy). So when a precious diamond becomes lodged in the belly of one of these flesh-ripping beasts, the man who wants it back knows who to turn to.

The hunt is on. Enlisted by his brother, Chase endeavours to retrieve the diamond in the greatest challenge of his career yet. Keeping a close eye on him is Jasmine (Erica Cerra, Eureka) his brother's girlfriend and as threats from a rival crime boss, played by The Mummy's Arnold Vosloo, draw closer loyalties start to shift.

When the blood starts flowing and the sea starts churning, Chase will have to go deeper, fight harder and kill with absolute finality if he is to survive.

Get ready for sun, fun and shark attacks as man takes on beast in Shark Killer, diving onto DVD on 20th July 2015, courtesy of Image Entertainment.

Forget Sharknado, it's time to get back in the water with Shark Killer.

UHD
The surviving members of the resistance face the First Order once again, and the legendary conflict between the Jedi and the Sith reaches its peak as Star Wars: The Rise of Skywalker is released on ... END_OF_DOCUMENT_TOKEN_TO_BE_REPLACED
Hot PicksView