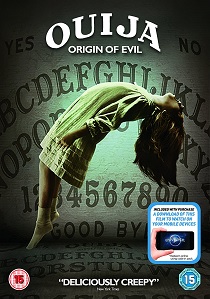 The chilling prequel to the horror hit invites audiences again into the lore of the spirit board when Ouija: Origin of Evil arrives on Digital Download on 13th February 2017 and on Blu-ray, DVD and On Demand on 27th February 2017 from Universal Pictures (UK). A two movie collection including both the original Ouija and Ouija: Origin of Evil will be released on Blu-ra and DVD on the same date.

Set 50 years prior to the events that took place in Ouija, director and writer Mike Flanagan (Oculus, Before I Wake) tells a terrifying new tale as a grieving spiritualist mother and her young daughters discover the buried dangers of an ancient game. With exclusive bonus content including deleted scenes, a character spotlight, a behind-the-scenes look at the making of the film, and more, Ouija: Origin of Evil delivers spine-tingling chills to viewers.

In 1967 Los Angeles, Alice (Elizabeth Reaser, The Twilight Series, Young Adult), a widowed mother and her daughters Paulina (Annalise Basso, Captain Fantastic) and Doris (Lulu Wilson, The Millers), add a new stunt to bolster their séance scam business when Alice brings home a sinister Ouija board. Breaking a cardinal rule of the game while desiring to communicate with their deceased father, the family inadvertently conjures a malevolent force, unleashing a terror to be reckoned with. As the youngest daughter is overtaken by the merciless spirit, this small family confronts unthinkable fears with the help of a priest (Henry Thomas, E.T The Extraterrestrial) to save her and send her possessor back to the other side.