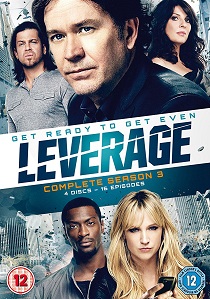 Get ready for another fix of high-stakes as TV's hottest gang of master thieves returns for the Third Season of Leverage, released on DVD from 28th May 2012 from Icon Home Entertainment. Following on from the success of seasons one and two, the team of modern day Robin Hoods returns in a bid to take revenge on those who use their wealth and power to victimize others.

With the team's leader Nate Ford (Hutton) now behind bars and his nemesis working for Interpol, a beautiful but mysterious stranger steps into call the shots for the expert con artists. Season Three of this action-packed series starts with a bang as the teammates devise schemes to free Nate from prison, expose a trafficking ring and infiltrate a defence research lab to take down international terrorists.

These tech-savvy grafters are highly skilled and ready to settle scores with the criminal underworld. It's time to take things to the next level.

This four-disc box set includes 16 exciting episodes with audio commentary so as more and more viewers get hooked on this witty and addictive show Leverage: Complete Season 3 is one DVD that would be a crime to miss!

DVD
Will Smith and Martin Lawrence are back on the case in the roles that launched the dynamic duo to global superstardom in Bad Boys For Life, arriving on DVD, Blu-ray and 4K UHD 25th May 2020 from Sony ... END_OF_DOCUMENT_TOKEN_TO_BE_REPLACED
Hot PicksView