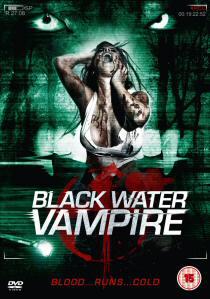 Who or what is responsible for a series of brutal killings, where the victims' bodies have been found drained of blood in Black Water Creek? A young journalist and her team investigate in Black Water Vampire, which comes to DVD from Image Entertainment.

Raymond Banks, has been locked up and certified criminally insane for the murders of four women whose bodies were brutalised and dumped in the woods, but Andrea Adams thinks the police have got it wrong and she's taking her film crew to find out the truth.

What they find there can only be told by the footage left behind. There are darker forces at work than anyone outside of Black Water can know... or will ever live to tell. Blood wrenching, soul-shattering terror waits for those who dare enter these woods in search of the Black Water Vampire.

Black Water Vampire is a first for found footage as vampires invade the genre in this slick, atmospheric horror that builds to a truly chilling climax. It makes its UK DVD debut on 24th March 2014 from Image Entertainment.