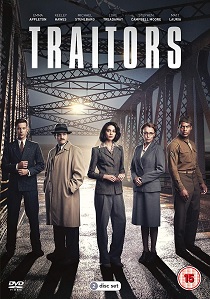 Created and written by Boardwalk Empire scribe Bash Doran in her first original commission for British TV, and starring a stellar line-up including Luke Treadaway (Ordeal by Innocence, Fortitude) Stephen Campbell Moore (The Last Post, The Child in Time) and Matt Lauria (Kingdom, Parenthood), this enthralling series begins after the Second World War as Britain, America and Russia are all vying for a new world order.

This coming of age female spy story follows Feef Symonds (Appleton - Clique, Grantchester), a gutsy, determined, but naive 21-year-old, struggling to define herself in a bewilderingly fast-changing world. When she accepts a position with the British Civil Service alongside the formidable and forward-thinking Priscilla (Hawes - Line of Duty, The Missing), she hopes to finally utilise her spy training picked up during the war. But her allegiances are about to be called in to question.

In the aftermath of a shock election win by the Labour Party lead by Clement Attlee, there is unrest across the water and an American agent, Rowe (Michael Stuhlbarg - The Shape of Water, The Post), targets Feef to spy on her own country. Accepting the challenge, she is about to discover a shocking secret that could put her life in grave danger...has she made a terrible mistake?

Traitors is set for its DVD release on 1st April 2019 and will also be available digitally to download and keep from iTunes, Amazon Prime Video and Google Play courtesy of Acorn Media International.

This stylish, spy drama delves deep into a seismic moment in global politics, and with shifting allegiances spelling a turning point for world powers, it holds up a mirror to our own turbulent and uncertain political climate. Alongside its dangerous, gripping storyline, it makes for truly edge-of-seat viewing.

DVD
The BAFTA-winning hit Unforgotten, released on DVD 26th April 2021 from BBC Worldwide, returns for a fourth series, as Cassie and Sunny investigate a cold case with alarming links to the police force. END_OF_DOCUMENT_TOKEN_TO_BE_REPLACED
Top PicksView