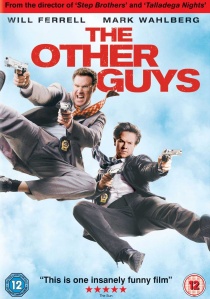 Will Ferrell and Mark Wahlberg are armed and dangerously funny in the year's #1 action comedy The Other Guys, available on Fully Loaded Blu-ray and DVD on 24th January 2011, courtesy of Sony Pictures Home Entertainment.

Funnyman Will Ferrell re-teams with director Adam McKay (Talladega Nights, Step Brothers) and partners onscreen with Mark Wahlberg (Date Night, The Departed) for this hilarious tale of misfit detectives who finally get the chance to step out from behind their desks and into the line of fire.

Exclusive bonus features on the Blu-ray include the first-ever all-mum commentary "The 'Mom'-mentary," an audio track in which the mothers of Will Ferrell, Adam McKay and writer Chris Henchy serve up their hilarious and uncensored reactions to the film; deleted and extended scenes; alternate action; Line-O-rama; the music video for "Pimps Don't Cry", featuring Cee-Lo and Eva Mendes; and the additional behind-the-scenes featurettes "Wasn't That???", "Crash and Burn!", "Why Are There Brits On This Movie?", "Rob Riggle Like To Party", "We Shouldn't Kiss a Chicken" and "Mark Wahlberg's Eating Contest Entourage".

The Blu-ray Disc also includes the BD-LiveT enabled movieIQ, which allows viewers to access live trivia information about The Other Guys' cast, crew, music and production - all while watching the movie. The Other Guys is part of the Laughing Stock collection, a range of hilarious Blu-rays and DVDs featuring the biggest names in comedy - including Adam Sandler, Will Ferrell and Seth Rogen - that are guaranteed to beat the winter blues.

NYPD Detectives Christopher Danson (Johnson) and P.K.Highsmith (Jackson) are the baddest and most beloved cops in New York City. They don't get tattoos - other men get tattoos of them. Two desks over and one back, sit Detectives Allen Gamble (Ferrell) and Terry Hoitz (Wahlberg). You've seen them in the background of photos of Danson and Highsmith, out of focus and eyes closed. They're not heroes - they're "the Other Guys". But every cop has his or her day and soon Gamble and Hoitz stumble into a seemingly innocuous case no other detective wants to touch that could turn into New York City's biggest crime. It's the opportunity of their lives, but are these guys made of the right stuff?

The Other Guys was written by Adam McKay (Talladega Nights, Anchorman) and Chris Henchy (Land of the Lost, TV's Entourage). It was produced by Will Ferrell, Adam McKay, Jimmy Miller (Land of the Lost, Step Brothers) and Patrick Crowley (The Bourne Identity series, Eagle Eye). It co-stars Bobby Cannavale (Paul Blart: Mall Cop, Snakes on a Plane), Steve Coogan (Night at the Museum 1 and 2, Tropic Thunder), Anne Heche (TV's Hung, Spread) and Lindsay Sloane (She's Out of My League, The In-Laws).

3D-BD
After escaping an attack by what he claims was a 70-foot shark, Jonas Taylor must confront his fears to save those trapped in a sunken submersible as The Meg arrives on DVD, Blu-ray, 3D Blu-ray, 4K ... END_OF_DOCUMENT_TOKEN_TO_BE_REPLACED
Hot PicksView