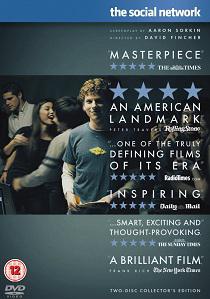 Sony Pictures Home Entertainment has announced the debut of the year's best reviewed and most talked about film, The Social Network, on 2-disc Blu-ray and 2-disc DVD on 14th February 2011. The film explores the moment at which Facebook, the most revolutionary social phenomenon of the new century, was invented and how its overnight success and wealth changed the lives of the classmates who created it.

Extensive bonus materials includecommentaries with Fincher, Sorkin and the cast, as well as the four-part feature length documentary How Did They Ever Make a Movie of Facebook? which covers the making of the film from the book through production. Viewers will explore the music of the film through a conversation with composers Trent Reznor and Atticus Ross, and also in the interactive feature In the Hall of the Mountain King, which allows the same scene to be viewed four different ways with different layers of music.

David Fincher's The Social Network is the stunning tale of a new breed of cultural insurgent: a punk genius who sparked a revolution and changed the face of human interaction for a generation, and perhaps forever. Shot through with emotional brutality and unexpected humor, this superbly crafted film chronicles the formation of Facebook and the battles over ownership that followed upon the website's unfathomable success.

With a complex, incisive screenplay by Aaron Sorkin and a brilliant cast including Jesse Eisenberg, Andrew Garfield and Justin Timberlake, The Social Network bears witness to the birth of an idea that rewove the fabric of society even as it unraveled the friendship of its creators.

Related Articles
Una, A Ghost Story, Lion, Carol, Pan, Her, Side Effects, The Girl with the Dragon Tattoo, Nightmare Alley
Now You See Me 2, The Double, Rio, Café Society, Now You See Me 2, Louder Than Bombs, The End Of The Tour, Batman v Superman: Dawn of Justice, American Ultra, Night Moves, The Double, Rio 2, Why Stop Now, Now You See Me, 30 Minutes or Less, Rio, Zombieland, Zombieland, The Hummingbird Project, Zombieland: Double Tap, Vivarium
Gone Girl, The Girl with the Dragon Tattoo, Zodiac
The Pact, The Pacific, Jurassic Park, Bohemian Rhapsody
For your consideration

BD
A 13-year-old girl named Meilin turns into a giant red panda whenever she gets too excited in Disney and Pixar's 25th feature film Turning Red, released on DVD, Blu-ray and 4K UHD 2nd May 2022 from Walt Disney Home ... END_OF_DOCUMENT_TOKEN_TO_BE_REPLACED
Top PicksView