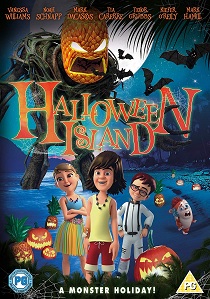 It's Halloween on the Island of Hawaii, and young Kai can't wait for the fun and mischief planned for the night ahead with best friends Leilani and Eddie.

An evening of trick or treating quickly descends into chaos however, when a real life monster descends on the town. An ancient evil, the fiendish spirit Pineapple Head has been unleashed and the three friends realise they may have been the ones to release him, having opened up a chest in which the mythical creature had been trapped, earlier that day.

To save their town, the trio must learn the stories of their ancestors to understand how Pineapple Head was initially captured; a journey in which Kai must experience the meaning of courage, friendship and tradition, and truly believe in the stories of his ancestors, in order to restore peace to their beloved island.

HotUHD
Say the 'B' word three times and have a wonderful Day-O as Tim Burton's Beetlejuice arrives for the first time on 4K UHD 31st August 2020 from Warner Home Video. END_OF_DOCUMENT_TOKEN_TO_BE_REPLACED
Top PicksView