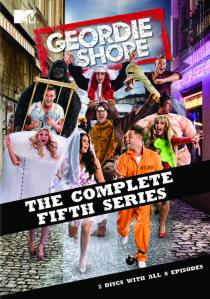 Alreet lads and lasses, feast your eyes on some more TV gold as the Geordies return for a fifth series, this time taking their wild ways and shocking antics on a tour of Europe! Geordie Shore Season 5 is available on DVD from 13th January 2014, courtesy of Paramount Home Entertainment.

From the temptations of Amsterdam's red light district, the cosmopolitan club scene in Barcelona and 'tashing on' in the icy climes of Prague to 'getting mortal' sampling the après ski in France, the reality TV stars are tasked with everything from organising bar crawls to hosting limousine buses packed with hen parties to pay their way.

The Geordies may have swapped countries, but that doesn't stop them bringing their old baggage on tour. Following their on/off romance, will the lure of Gaz's 'parsnip' prove too much for Charlotte once again? Or will she seduce a handsome Spaniard instead?

What will happen when European chic meets synthetic hair extensions and sleeveless vests? There's sure to be more drunken romps, bed hopping and unadulterated partying than you can shake a can of lager at, so Europe had better watch out! Brighten up your January with Geordie Shore Season 5 on DVD.

HotDVDBDUHD
Released on DVD, Blu-ray and 4K UHD 16th September 2019 from Lionsgate Home Entertainment, super-assassin John Wick is back and on the run after killing a member of the international assassin's guild, and with a $14 million price tag on his head - he is the target of hit men and women everywhere. END_OF_DOCUMENT_TOKEN_TO_BE_REPLACED
Hot PicksView