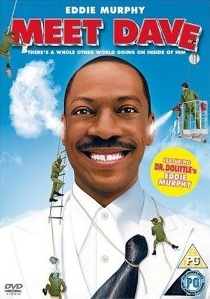 News
News Article Go back to homepage
Comedy King Eddie Murphy is Dave, landing on UK earth and on DVD on 1st December 2008, in Meet Dave - a family comedy certain to keep everyone laughing through to Christmas. PLUS, continuing the franchise started by Eddie Murphy 10 years ago, Dr. Dolittle 4: Tail To The Chief also premieres on DVD on the same day, both from Twentieth Century Fox Home Entertainment.
Twentieth Century Fox Home Entertainment
Unknown
01/12/2008
Thank you for supporting DVD365.net when you order using the link(s) below. As an Amazon Associate we earn from qualifying purchases
Buy DVD
Information

Comedy King Eddie Murphy is Dave -- a clumsy, disco-dressed alien spaceship on a mission to save his home planet! Landing on UK earth and on DVD on 1st December 2008, Meet Dave is a hilarious family comedy certain to keep everyone laughing through to Christmas. PLUS, continuing the world-famous Dr Dolittle franchise started by Eddie Murphy 10 years ago, Dr. Dolittle 4: Tail To The Chief also premieres on DVD on the same day, both from Twentieth Century Fox Home Entertainment.

Dave and his crew of tiny, human-looking aliens arrive on earth in the perfect disguise -- a spaceship that looks like an ordinary man (who also closely resembles the ship's captain played by Murphy). Each miniature member is responsible for operating a particular part of the body and the crew embarks on an adventure in Manhattan where they meet a family who teaches them a thing or two about humanity. Dave develops an unlikely friendship with a mother, Gina Morrison (Elizabeth Banks) and her young son Josh, forcing him to rethink his humanity and to lay his body -- and his spaceship -- on the line!

To accompany Meet Dave as this year's perfect family stocking filler, Dr Dolittle 4: Tail To The Chief makes it's UK debut exclusively on DVD. Kyla Pratt (Dr. Dolittle films) returns as the 'animal whisperer' Maya Dolittle who discovers that being accepted into veterinary school isn't as easy as she expected. She certainly never expected that her 'gift' would be a matter of national security in this fun-filled comedy!

Just when she was feeling like a huge disappointment, the President of the United States (Peter Coyote -- E.T., A Walk to Remember) asks Maya to use her special talents to work with the disobedient First Dog in order to help avert a major national crisis. With her important new assignment and lots of help from her loyal dog pal Lucky, Maya finally has a chance to impress the veterinary school acceptance committee. Perfect fun for the entire family, Dr. Dolittle 4: Tail To The Chief delivers a wholesome, animal-filled comedy for all to enjoy.

HotDVDBDDIGITAL
With stunning revelations, glamorous journeys, and the arrival of the Jazz Age, Downton Abbey: A New Era, released on DVD and Blu-ray 15th August 2022 from Warner Home Video, will be the Crawleys' biggest adventure yet as they grapple with their future and new intrigue about ... END_OF_DOCUMENT_TOKEN_TO_BE_REPLACED
Top PicksView