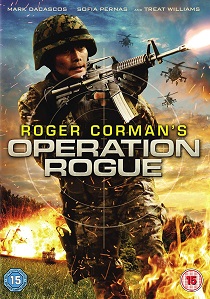 Bonus materials include deleted scenes, as well as two behind-the-scenes featurettes. In Corman Goes Rogue, Corman give viewers the inside scoop about Operation Rogue, discussing filming in the Philippines, making combat films for the modern audience and returning to work with some of the talent with whom he's collaborated previously. For the Corman on Corman featurette, Corman speaks about his career, covering everything from his early days at American International Pictures to his current work today.

Deep in the jungles of Southeast Asia, a terrorist organisation has stolen materials to create a dangerous chemical bomb. It is up to Captain Max Randall (Mark Dacascos) and his team of Marines to stop them. But when Randall's team kills the terrorist leader's son, the group responds by kidnapping General Wallace's (Treat Williams) daughter. It is up to Randall to save her and stop the terrorist attack in this action-packed, explosive thriller from legendary producer Roger Corman.

Roger Corman's Operation Rogue is directed by Brian Clyde from a screenplay by Mike MacLean. The film was produced by Roger and Julie Corman with Steve Goldenberg and Christopher Santiago serving as associate producers.

DVD
An expert cutter must outwit a dangerous group of mobsters in order to survive a fateful night in The Outfit, released 1st August 2022 on DVD, Blu-ray and 4K UHD from Dazzler Media. END_OF_DOCUMENT_TOKEN_TO_BE_REPLACED
Top PicksView