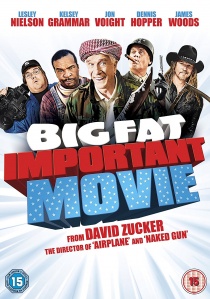 From spoof-comedy legend David Zucker, the director of The Naked Gun, Airplane! and Scary Movie 3 & 4, Big Fat Important Movie is an outrageous bare-knuckle satire where no one is safe from the onslaught of offensive lunacy. When obnoxious, Hollywood director Michael Malone (remind you of documentary-filmmakers you can think of?) organises a Ban the 4th of July campaign, his efforts are up-ended by a gang of spirits from America's past (the film's original title was An American Carol.)

Zucker butchers and barbecues a herd of sacred cows in this latest parody featuring an all-star cast. We would be irresponsible if we did not point out the following: this movie may be offensive to children, young people, old people, in-the-middle people, some people on the right, all people on the left, terrorists, pacifists, war-mongers, fishmongers, Christians, Jews, Muslims, atheists, agnostics (though you'd have to prove it to them), any kind of civil rights groups, liberals, conservatives, neo-cons, ex-cons, future cons, Republicans, Democrats, Libertarians, people of colour, people of no colour, English speakers, English-as-a-second language speakers, non-speakers, men, women, more women, and college professors. Native Americans should be okay.

In classic Zucker tradition, this may well be the most offensive movie of all time. Kevin Farley (The Waterboy, Curb Your Enthusiasm) stars as Michael Malone, alongside Kelsey Grammer (Frasier, Cheers), Leslie Nielsen (Airplane, The Naked Gun), Dennis Hopper (Easy Rider, Apocalypse Now, Speed), James Woods (Once Upon a Time in America, Ghosts of Mississippi) and Jon Voight (Transformers, 24, National Treasure: Book of Secrets).