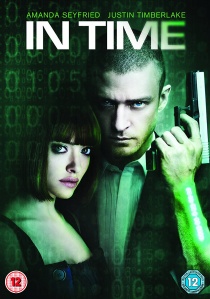 How would you survive in a future where time is money and, unless you can pay, life stops at 25? What lengths would you go to for one extra day? Step into this world when In Time, the imaginative futuristic thriller, arrives on Blu-ray Triple Play and DVD on 27th February 2012 from Twentieth Century Fox Home Entertainment.

In the year 2161, in the slum of 'Dayton' Will Salas (Justin Timberlake, The Social Network) lives minute-to-minute until an enigmatic stranger gifts him 116 years of time granting Will access to the world and 'time zones' of the wealthy. In over his head, Will's new found time soon sparks the interests of the 'Time Keepers', led by Raymond Leon (Cillian Murphy, Inception) who account for every second earned and spent.

Charged with murder, desperate and forced to run for his life, fate throws Will together with a beautiful young heiress, Sylvia Weis (Amanda Seyfried, Mamma Mia). Together, they race for survival - can they tackle the unfair and corrupt system before their time runs out?

In Time was written and directed by Andrew Niccol (The Truman Show, Lord of War) and stars a hot young ensemble cast including Olivia Wilde (Cowboys and Aliens, House) and Alex Pettyfer (Beastly, I Am Number Four).

Life is too short not to watch In Time in stunning high definition. The Blu-ray Triple Play edition includes special features 'The Minutes' which delves into exclusive footage documenting the urgent fight to stay alive, as well as a selection of deleted scenes, 'Live Lookup' and an app for iOs.