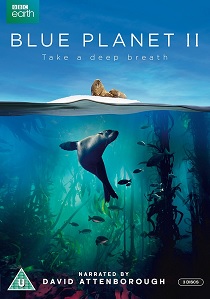 This bold cinematic experience takes viewers on a magical adventure across the greatest, yet least known parts of our planet - our oceans. Since The Blue Planet aired in 2001, our understanding of life beneath the waves has completely changed.

Travelling from the icy polar seas to the vibrant blues of the coral atolls, Blue Planet II shares these astonishing new discoveries. Meet the strange octopuses lurking in the depths of the Antarctic ocean. Watch giant trevally fish leap to catch birds in mid-air. And ride on the back of a hammerhead shark as it attacks. Inspiring awe and wonder, this series reveals surprising new places, charismatic new characters and extraordinary new behaviours.

But we now know that ocean health is under threat. Never has there been a more crucial time to explore our remotest seas, and to examine what the future will hold for our blue planet.